The Game Over Club: The N64 snubbed?

The Game Over Club: The N64 snubbed?: "The graphics haven't aged well." Is a common thing I hear from gaming enthusiasts. Now while I didn't grow up on the N6...
Posted by Maximpact24 at 19:16 No comments:

Is a common thing I hear from gaming enthusiasts. Now while I didn't grow up on the N64 (that spot is reserved for my dear Colecovision and NES), I did however spend an ample amount of my teen years playing on the miracle machine. For me I look at the Nintendo 64 as a stepping stone to our current gaming consoles. New gamer's can look down on Nintendo and the supposed 'miracle machine', but the original Playstation is just as bad in comparison.

But where the Playstation excelled at single player games (RPG's, shmups, ), the N64 excelled at multiplay (Racing, Party Games). You had better sound with the PS1, but MUCH faster loading times on the N64. Also Nintendo's first party games were stronger, while Sony relied on heavy hitting 3rd party companies to keep gamer's glued to they're TV's.

Nintendo, Sega, and Sony had to trailblaze into the 3D realm. It was inevitable. And now some 17 years after the N64 lay dormant the proof is in the pudding. The console is one of the most fun you could have. Especially when enjoyed with the company of 3 of your friends. No multitap required! 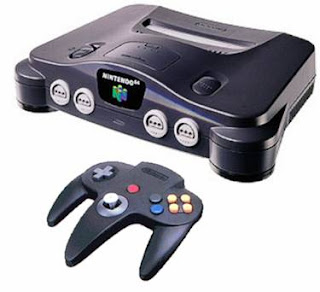 The king of multiplayer? I think so! 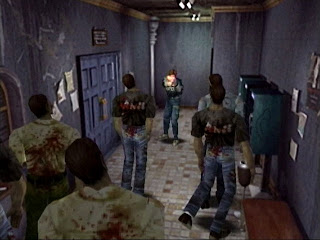 Games like Resident Evil 2 look excellent on the N64 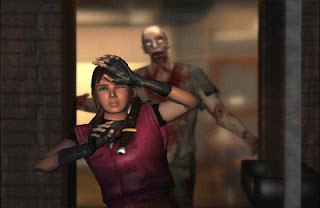 I never imagined that we would ever get a port of RE2 on the 64!

Just remember, to get to our Uncharted's, Gears of Wars, or, (god forbid) our Call of Duties we had to start with Mario 64, the original Rainbow Six, and Goldeneye 007's and Perfect Dark's. So next time you bash the 64 because it looks bland, boring, or just down right ugly...well, stick to the first party games! Ocarina of Time, Pokemon Snap, Majora's Mask, Mario Tennis, Mario Party 1-3, Wave Race 64 among MANY others. ^>^
Posted by Maximpact24 at 19:15 No comments:

Prisoners of War (NES) The Grade

Actually, that's not entirely true. While the Ikari Warrior games are complete trash, this game along with Baseball Stars 2, and Guerrilla War are the exceptions. P.O.W. was a hit 2 player arcade game ported over to the NES in 89'. The NES features only 1 player action though. 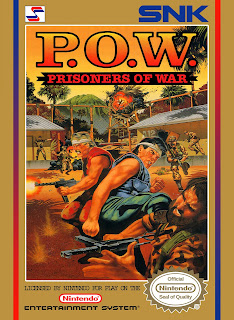 So you play as a soldier who purposely gets captured by the enemy in order to escape and save his allies. You start the game with 3 lives, a punch, kick, back attack, and a jump kick. Along the way you can collect armor,  health, knives, brass knuckles (increases your punching power), and a machine gun. I just want to note that the 'hit detection' is a bit off. Nowhere near as bad as other NES games I've played, but it could have been tighter. 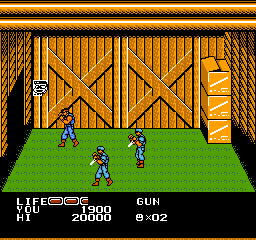 Tip: Don't enter any doorways. They're just a time waster. 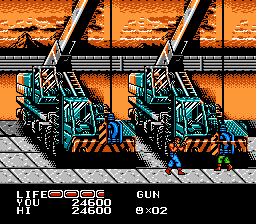 Tip: At this part move your man to the top and you won't be crushed!

Unique in the game is the fact that you can enter doorways, cave entrances, and even the back of supply trucks. You'll have to face a few armed soldiers, but if you kill them you'll receive a power-up. Pretty good, but in my opinion, it's better to just continue down your path. 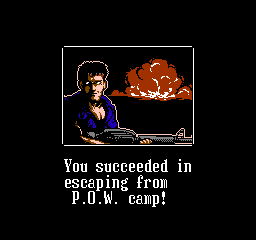 If you make it past a level you'll see some nice cut-scenes! 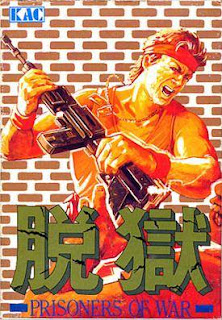 There's only 4 levels to slug your way through. And honestly, they're long enough. Coupled with some great music (I especially like Level 2 and the boss theme!) and sound effects you'll be having a good enough time. The graphics are also very well done. The sprites (while not varied) are good and clean looking. The detail in the objects and backgrounds are nice. Overall, good effort. P.O.W. gets a B.

While the game is notoriously hard, it can be overcome with the 20 man cheat code. The hit detection could have been a bit better, but the nice visuals and sounds keep me coming back for more. A two player mode should have been included in the game. Chances are you'll find this in the cheap bin of games, but its a nice filler type of game in your collection. Grab this game. It's pretty good! ^>^

The Game Over Club: Up on the Marquee..

The Game Over Club: Up on the Marquee..: I was a child born into the mid half of the 80's. So my experience with arcades at the time was not as great as others who grew up befor...
Posted by Maximpact24 at 12:58 No comments:

Up on the Marquee..

I was a child born into the mid half of the 80's. So my experience with arcades at the time was not as great as others who grew up before me. I was roughly seven when I encountered my first arcade machine. It was in a mall next to where my mom worked, Zehrs.

It was called the North Maple Mall Arcade and let me tell you, that game changed my life. That game was Double Dragon.

My first brush with arcade marquee's. What a doozy.

Other great titles that were there at the time included: Asteroids, Robocop, Guerrilla War, Ninja Gaiden, Turbo, Golden Axe and a few others. But those where the main ones of my childhood. I envy all of you who grew up in the heyday of the arcade boom. Those that felt the rush of Ms. Pacman whizzing by ghosts, furious games of two player Karate Champ, and the thrill of gaining that extra fighter ship in Galaga.

So I would like to show you some of my near and dear favourite arcade marquee's. Enjoy!

I love the choice of colours. Very simple and effective.

So far-fetched, yet, so cool.

I really enjoy most of Sega's arcade art from the 80's.

Data East was no slouch either!

Love the sci-fi look of this piece

Need I say more? Funny, I like the white grid in the background. ^>^

A brilliant piece of lettering

Once again I know I'm missing out on some all-time classic ones. But I thought I would pay homage to some of the lesser known/forgotten ones (except for Donkey Kong, natch) Hey, notice the guy in Spy Hunter kinda looks like Val Kilmer? Ha, ha, ha! Anywho, the bleeps and boops as well as the bright glow of the screens in a darken room will always stay with me. While I wasn't around at its peak, I will always remember being a wide-eyed kid standing on my tip-toes to see some of the world's finest games. The arcades will never die, but will live on in our memories. ^>^

So here we have a game developed by Game Freak, yes, the makers of Pikachu, Pokemon, and Team Rocket blasting off into space. To say this game is vastly underrated...well, its truly deserving. For the initiates who need to know you play as protagonist Bon-Bon who is out to save his friend Candy. Candy has been taken hostage by her...toys.

So its off to rescue your friend (or is it girlfriend? ^-^) from the 8 nasty toy bosses. Ranging from Sumo wrestlers, swimmers (yes I said swimmers), martial artists, dancers...and other assortments of baddies. All very unique, and interesting to say the least. 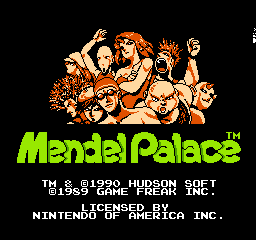 I really enjoy this title screen. ^-^ 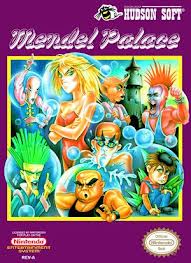 The cover art is okay. Nothing Special though. ^>^ 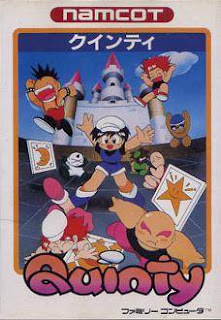 This game is known as Quinty in Japan. Also published by Namcot. 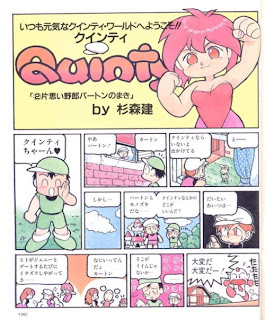 A cool little flyer for Quinty.

Okay so here's the rules: You need to first defeat the other 8 supreme toy masters to gain access into the Mendel Palace. You select one level and must go through 9 stages to reach the boss fight. Bon-Bon  moves around a 5X7 grid. You defeat enemies by flipping tiles over, thus pushing them (or even knocking them over). Your goal is to get rid of all enemies by tossing them back into the wall. Easy eh? Sounds easy but its rather challenging. 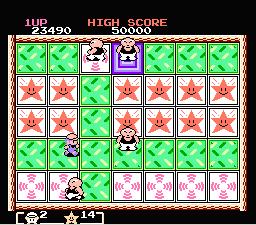 Watch out for the Sumo's attack!

You reveal a plethora of things under the tiles too. Some can be exhausted, others have stars (100 grants you an extra life by the way ^>^), the sun flips EVERY tile on the board, some other tiles flip single rows, later on you begin to flip blocks that impede your progress and your opposition, some generate enemies, others send you into bonus areas. This is one neat concept, that meshes extremely well with the different characteristics of the baddies.

An under appreciated gem, it also has great music too (Game Freak always created great tunes). While the graphics and the story may be too cutesy for some of you diehards, it's an absolute must play. 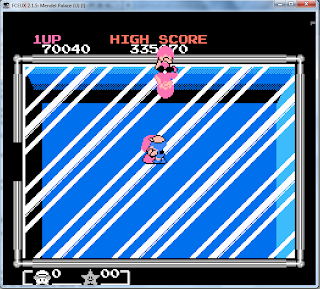 What better way than to celebrate with a kiss? ^>^

Did I also mention this is a two player co-op game? Even better, I know, I know! Final grade: A.
Mendel Palace is one terrific game on the NES. The enemies are diverse and always throw something new at you. The tiles hold many secrets, boons, and hazards that keep you challenged (but the variety alleviates boredom). The music and graphics while cartoony, are nice looking and a treat for the ears. Grab this game! ^>^

Well so far so good! Around 12 new NES games beaten and going strong. I want to take the time to let you all know how I feel about some of these games. A short grading of some of these first time beats. First off; Who Framed Roger Rabbit.

Ugh..not much of an ending.

The game gets a D+. And that's being generous. One of the worst offerings by LJN. Its too bad really because I loved the movie so. But that last boss battle with Judge Doom takes WAY to long. Not only that but you have to finish him off with D.I.P. (an acid to toons) and must fire it off at a blistering speed. We're talking lightning folks! I enlisted the aid of the NES Advantage joystick for its turbo fire capabilities. Blech.

Next up, Capcom's Tailspin: 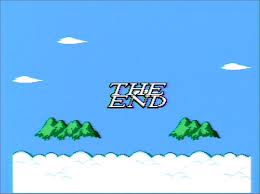 Not much of an ending here either. 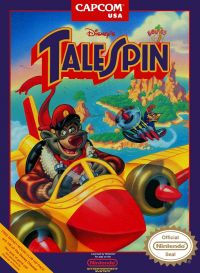 Final grade: C+. Much better than Roger Rabbit yet, where's the challenge? The last airship fight was cool and all, but I just never felt challenged. Shame really, I loved the cartoon in its heyday. One of Capcom's forgotten games for sure. 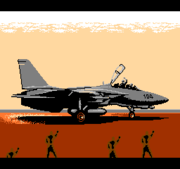 Slightly better end than the other two games. 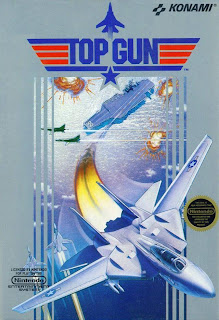 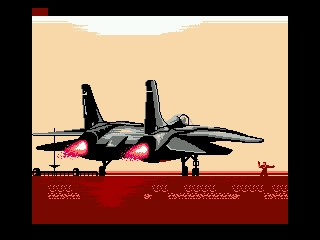 A new favorite in my library. I'm not joking, this is one decent game. But that's just it. Decent. Not good. But decent. Top Gun receives WAAAAY too much flak thanks in (major) part to the Angry Video Game Nerd (James Rolfe). Don't get me wrong his show is just that. A show. A funny take on all of his misadventures as a gamer. One who (simply) couldn't land the plane.

And that's the major sticking point. The landing mini game after you defeat a boss. The main control indicator even tells you what altitude and speed you should be at by the time your closing in on the aircraft carrier! For god sakes, I can land the plane about 75% of the time! It's not that tough! Funny thing though. I defeated the rocket ship, but crashed the final landing sequence, ha ha ha! Good thing I had an extra life or I would have been pissed. Final grade: B+
Posted by Maximpact24 at 22:13 No comments: